Impacts of the Russia-Ukraine conflict on food security

After February 24, what previously was starting to shake financial markets and filling them with uncertainty became a tangible concern about food security and supply chain disruptions around the world.

The inflationary dynamics of the Russia-Ukraine conflict, mainly driven by oil prices spiking up to AU$161.57/barrel and shortages of grain exports, due to the closures of key Ukrainian ports and the sanctions on Russia, are putting a lot of pressure on global human and livestock consumption as a consequence of the interconnectedness of commercial markets. Nonetheless, it has and will hit particularly the poorest people of North Africa and the Middle East who are highly reliant on Ukrainian food exports. Prices going up mean that people from these regions, who already spend 40% of their income on food, have only two options: to spend more money on it, given the inelastic nature of these goods, or to sacrifice important nutrients from their diet.

As Scott Reynold Nelson, author and History Professor at the University of Georgia, points out Ukraine has important advantages that position it as one of the top global producers of grain. Ukraine’s flat terrain, made of the richest and most fertile soil in the world known as “black soil”, and its proximity to deep waters from streams and rivers allow growing grains in 2 seasons, whereas its access to the Black Sea, Middle East and North Africa add up to its trade advantage as a leading exporter of barley, corn, wheat, and sunflower seeds.

Some say that “grain makes and destroys empires” because it’s only after a country is able to cover its basic food needs that everything else, including industrialization, is possible. As an example, we can refer to the Arab Spring in 2010-2012 when food was the catalyst of an entire revolution. In context, due to a sudden and drastic rise in global grain prices, the Arab countries experienced approximately a 37% inflation in the price of bread which is the source of 50% of the total calorie consumption of their population. This price increase had a huge impact on food security since most of these countries, especially Egypt, relied heavily on wheat imports and the effects were felt mainly by the poorest part of the population.

The role of Russia and Ukraine in global agriculture

Both Russia and Ukraine play a central role in the production of key agricultural products. In recent years, both countries have seen their crop output and values rise which has helped them gain relevance in the market and increase their share of global exports.

Due to the fact that Russia and Ukraine combined account for 29% of the world’s wheat, 19% of the maize and 80% of sunflower oil exports, any disruption in their agricultural activities affects the overall global food security. This led the UN Security Council to point out Russia as the responsible party for a looming global food crisis, potentially the largest world crisis since WWII since Ukraine serves as “the breadbasket for Europe”.

The agricultural sector has been additionally affected because Russia is a crucial player in the fertiliser market, accounting for 22% of global exports of ammonia, 14% of the world's urea exports and about 14% of monoammonium phosphate (MAP). Combined with Belarus, this country is responsible for 40% of global potash exports, essential to increase and support crop yield.

Quoting Maximo Torero, chief economist for FAO, a “fertilizer crisis is in some respects more worrying [than wheat supply shortages] because it could inhibit food production in the rest of the world”. As Peter Zeihan highlights, the widespread and multi-year effects of a fertiliser shortage would compromise global crop yields and output around the world affecting up to 2 billion people facing potential malnutrition if a resolution is not found.

To illustrate the aforementioned, we can refer to the case of Brazil,  the world's biggest soybean exporter and one of the top agricultural exporters in the world. Since this country imports 50% of its fertilizers from Russia and Belarus, considering a scenario where sanctions on Russian exports remain in place would translate into a significant increase in production cost and lower output.

The effects would not be felt in the immediate future because “the major crops and producing regions are now entering harvesting season and there is a low demand for fertilisers” but a significant decrease could be expected in the “output of soybeans and possibly other crops if the shortage [of fertilisers] extends to the end of the year, potentially hurting Brazil’s huge commodity-based trade surplus.”

Nonetheless, the South American country is already implementing measures to try to mitigate the impact of the geopolitical conflict within its borders. By the end of March, after a meeting between President Vladimir Putin and President Jair Bolsonaro, Brazil received 30 ships of fertiliser from Russia. Bolsonaro urged the World Trade Organization to intervene in order to avoid interruptions in the supply chain and increasing prices for one of the most crucial commodities in agriculture not only in this nation but all around the world.

Just as with the case of Brazil, many countries are and would face similar challenges since Russia is the leading fertilizer supplier in the world, amounting to US$7 billion dollar-value exports in 2020, as shown in the following graph.

Facing the challenges from various fronts

Two months after Russia’s invasion of Ukraine, “FAO estimates approximately 33% of the crops and agricultural land may not be harvested because of the escalating war.” Despite the call to action of the Ukrainian President, Volodymyr Zelenskyy, to sow as many fields as possible, the lack of work labour, damaged infrastructure, and shortage of key supplies such as fuel, fertilisers and crops has become one of the most pressing challenges to face for Ukrainian and global agricultural exports.

As a consequence, many countries around the world are trying to contain the risks and find multi-faceted solutions to the challenges originating from this conflict. For example, the US is releasing more barrels of oil to try to soothe the supply gap and readjust prices, but facing agricultural shortages is not easy or straightforward because of the infrastructure, logistics and resources needed to seed, harvest, transport and export crops. Canada and North Dakota stand out as the only places that could provide a quick solution for global grain supply because they could be planted this month and harvested in 3 months' time, as noted by Professor Nelson.

History has shown that a crisis can be a window of opportunity for certain industries. The already changing world dynamics towards a more sustainable future and the many lessons learned from the Covid-19 pandemic could translate into a fast and steady incorporation of technology in agriculture. The current geopolitical conflict is pushing economies and agents in the sector to adopt innovative practices and tools to raise productivity and reduce costs of these inelastic demand commodities, especially given the fact that in early March the prospects of wheat prices rising up to AU$572.62/tonne have been already surpassed by reality when on March 7th, a peak of AU$617.08/tonne was recorded.

Underlying issues and multilateral topics should be put on the table

With everything that’s going on and that began way before 2022, there are many big issues that are having a huge impact on agriculture. Among the many questions that 2022 is raising, we highlight the following:

The agricultural future for Australia and the rest of the world needs several years to be planned, developed and implemented, as well as various stakeholders working together, or at least simultaneously, to support the increasing demand for agricultural goods. Growing more crops and exporting them will require investment in infrastructure and production. However, these efforts are a multi-year project and will most likely not be ready in time to offset the impact of this war.

In the meantime, this would be a good chance for Australia to accelerate its commitment to supporting the agricultural sector in its path to becoming a $100 billion industry by 2030. Agtech will play a central role in the transformation of agriculture globally, but so will increased investment in farmland production and export infrastructure which is increasingly becoming a safe haven for agricultural investors seeking safe and stable returns. Agricultural commodities at historic highs will support continued growth or a neutral farmland outlook, particularly in areas with consistent returns, access to resources (water rights) and a positive climate change outlook.

Data-driven agribusiness.
Tools and analytics for a more sustainable, thriving future.
Sign up for free 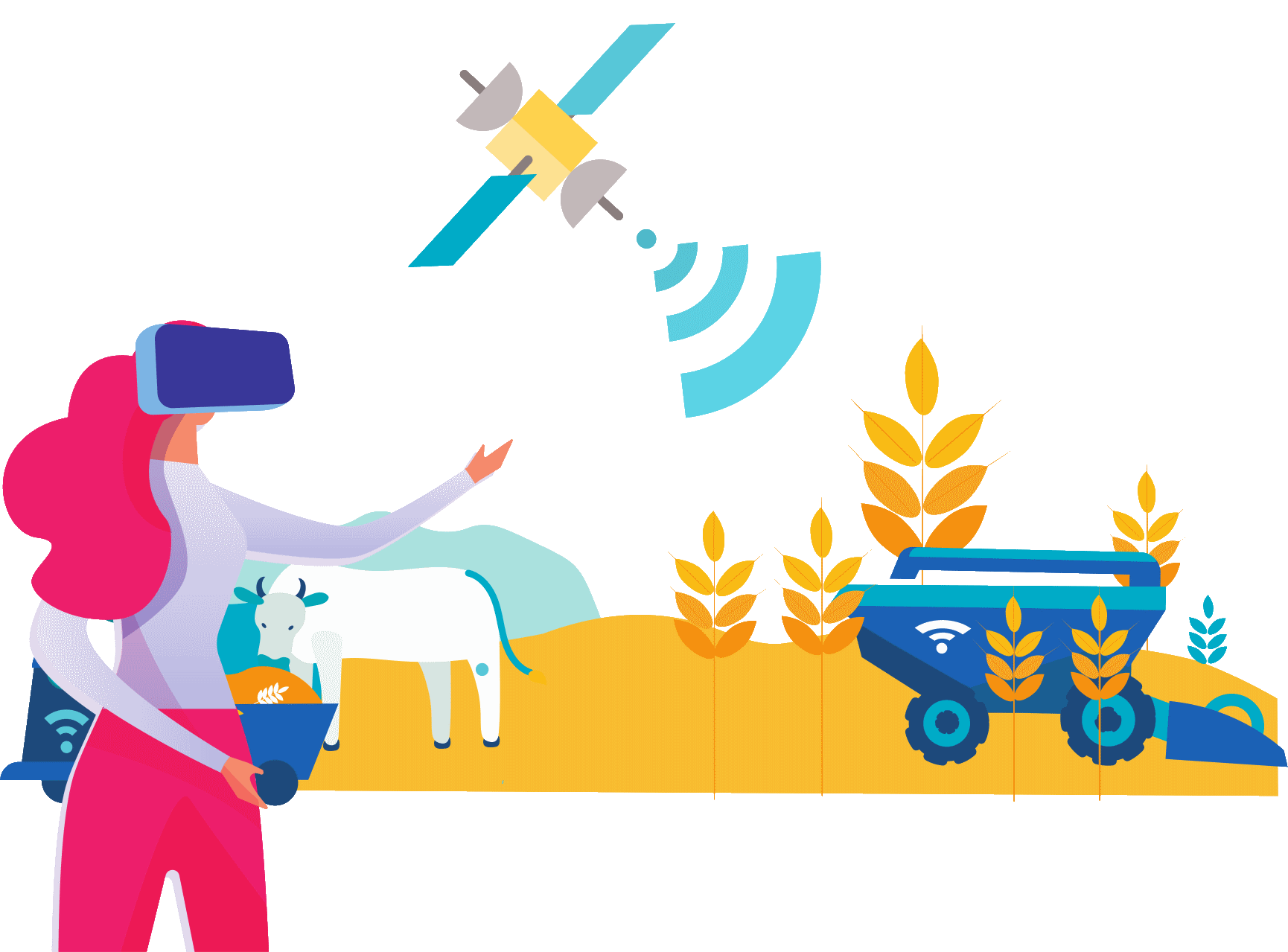